We want people to enjoy the military training estate, but it can be a dangerous place if you don't follow the rules. There are a number of ways you can put your life at risk and here's a few of the most common.

Picking up military debris – even though it might explode!

We know that pieces of twisted metal sticking up from the soil look interesting. They might even be the remains of some munitions. This might seem pretty cool...until they blow up in your hands.

When you’re out and about on a military training area, don’t pick anything up. Although we do our best to clear up ordnance, some does get missed and it can be dangerous. Don’t touch anything and keep a close eye on children and pets. Driving wherever you want

You might think your big 4x4 can handle whatever our terrain can throw at it, but some of these tracks are used by armoured and tracked vehicles. Just because a Warrior or Scimitar can get round doesn't mean your car can.

The picture above was taken on Salisbury Plain. The person had been driving up the knife edge in the top left of the picture. As he got to the top he flipped backwards onto the roof and was then pulled back down the slope by his mate. He didn’t suffer any injuries apart from a big dent to his pride, although the outcome could have been very different. Driving dangerously is an invitation to disaster anywhere, but it could be even worse on the training estate. Many roads on MOD land are uneven and you never know what’s around the corner – you might crash into a troop of soldiers or even a tank. And trust us, the tank will win.

Plenty of people driving on MOD land do so safely and in accordance with the laws. Those who don’t are taking their lives in their hands. If you’re driving on the military training estate, stick to Public Rights of Way or Permissive Rights of Way that are open to the public, and drive sensibly and carefully.

Ignoring the red flags and wandering into a live firing area

Don’t be like the teenagers who ignored the red flags and rode their quad bikes onto the training estate, popping up just behind the targets as a group of soldiers was about to start firing at them.

Red flags or lights signal that the land is being used for life threatening activities and that public access is completely prohibited. Armoured vehicles, bullets, pyrotechnics and fast moving vehicles are all a threat. 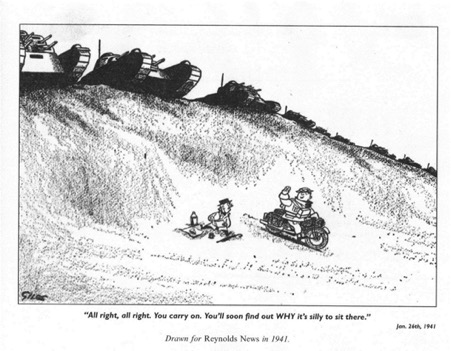 You could probably excuse a lack of knowledge about the dangers in 1941 but in 2018– with better technology and instant access to information – there is no excuse for ignoring the messages that are out there or not being aware of the inherent dangers on the military training estate. Firing times for many sites are posted online, and should be correct, but there are sometimes changes so what you see on the ground takes precedence. If the firing times online say the site is open, but a red flag says it’s closed, it’s closed!

We've heard some interesting excuses for ignoring the rules over the years. Check back next week for a countdown of some of the most ridiculous things people have said when they're caught breaking the rules.